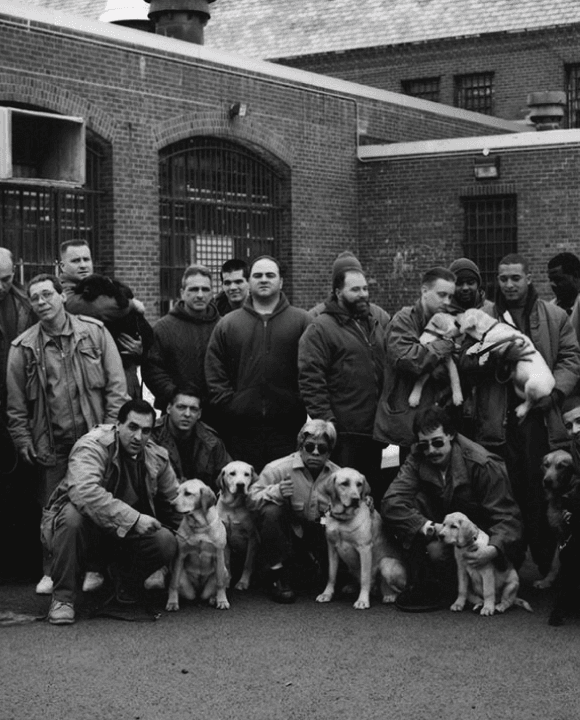 Since the beginning of the 20th century, the United States has a documented history of various animals participating positively in the rehabilitation and mental health support of prisoners and inmates. The establishment of animal therapy programs and service dog training programs with inmates reasonably demonstrates a long-spanning philosophical belief that prison systems’ sole purpose should not be to punish its occupants but should also provide opportunities for growth and personal skill development.

Animals That Helped Bring Prisoners of War Solace in Captivity

As early as World War II, the benefits of caring for and interacting with animals (horses, birds, dogs, rabbits, etc.) in a therapeutic and community-building capacity was noted by employees of POW camps at Camp Stark in New Hampshire. In this case, horses, which were used for logging work also ultimately helped the prisoners interact more organically with the local townspeople as well as their guards. The prisoners also adopted a pair of rabbits and a pet crow, which brought them joy and something to care for until the rabbits multiplied so much that it was necessary to rehouse them.

One of the first successful animal therapy programs in the United States was started in 1975 in Lima, Ohio, at the Oakwood Forensic Center previously known as the Lima State Hospital for the Criminally Insane. While this institution was part of the state’s Mental Health Department, at the time, it was also considered the most secure facility in the state.

While working as a psychiatric social worker, a man by the name of David Lee took note of numerous improvements and changes which occurred within a ward in which a patient had found a hurt sparrow in a prison yard and smuggled it into the building to care for it. The bird became a uniting community project on the ward with multiple patients catching insects to feed the bird. This was the first time that the inmates related well to the staff. This inspired a year-long study where two identical wards were compared with the one difference of one had pets and the other did not.

The results David Lee found at the end of this study were startling.  The ward with pets required half the amount of medication, had reduced violence, and had no suicide attempts. The other ward had eight suicide attempts within the same period. This study has gone on to inspire other facilities to implement their own animal therapy programs.

The original founder of inmate dog training programs within the United States is considered to be a nun by the name of Sister Pauline Quinn (previously Kathy Quinn). After experiencing substantial trauma and homelessness in her own life, she found great comfort in the companionship of dogs. Sister Pauline then decided she wanted to share these healing experiences with others. In the 1980s, she went on to found several programs called the Prison Pet Partnership in the Washington State Correction Center for Women along with Pathways to Hope, and Bridges and Pathways of Courage, in an effort to share the unconditional love she herself found when working with canines. Ultimately, Sister Pauline is known today to have helped start 17+ dog training programs in various correctional facilities.