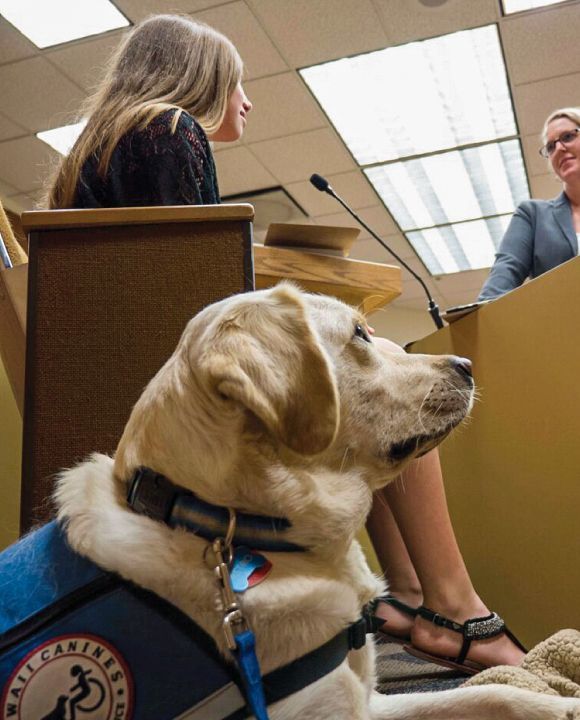 A lesser-known role service dogs can be trained to occupy is that of a facility dog. Partnered with its handler, a service dog can receive customized training for work in organizations such as the judicial system to provide comfort and stability to individuals in highly stressful court cases. A facility dog is basically a service or therapy dog that works within a specific type of organization to provide services in collaboration with their handler’s direction. Some more well-known facility dog roles are therapeutic partnerships with nursing homes, mental health care facilities, juvenile detention facilities, and prison systems.

History of Canines Assisting in Courtrooms

In the last thirty years or so, court systems across the United States have begun to recognize the unique benefits of having facility service dogs available to provide support during difficult court cases. As early as 1989, trained dogs have been assisting victims of crimes to navigate difficult court cases with a greater feeling of security. In 2004 an organization named Canine Companions for Independence became the first known organization of its kind in the United States to specifically place a service dog for victim support purposes. This was a Labrador Retriever mix named Ellie who served in a prosecutor’s office based in Seattle, Washington. Several years later in 2012, this successful partnership helped to inspire the conception of Courthouse Dogs Foundation. By 2015, twenty-six states had developed programs where facility service and therapy dogs partnered with judicial systems to support crime victims.

Use of Canine Support Dogs Abroad

In 2019, a prosecutor based in Southwest France named Frederic Almendros learned about the success stories occurring in Seattle, Washington court facility dog programs. He then took steps to have a service dog named Lol, who is a resident of a nearby fire station, provide official judicial support to crime victims. Lol is thought to be the first service animal to be used in this official capacity in Europe. As of 2021, Lol has provided support to a wide range of individuals in approximately eighty different criminal investigations.

Lol’s participation in court cases with Frederic Almendros later instilled motivation in another family lawyer in France named Mustapha Yassfy, who persuaded his colleagues to give Lol a chance to help in their difficult cases. This experiment was found so beneficial that additional service dog relationships were added to their teams and other towns joined in such as Nevers and Nimes. An additional twenty court jurisdictions are projected to adopt the use of service dogs to their court systems by the end of 2022, including a prominent courthouse in Paris, Palais de Justice.

The next step that advocates of these skilled service animals have their eyes on is opening facility service dog programs to government backing and funding. Presently, politicians in France are working on pushing a bill through parliament to create formal judicial recognition for the benefits of these service animals. The success of this bill could lead to dedicated funding to service dog training and help court systems across France obtain better access to service dogs.

What Do Service Dogs Do in the Courtroom?

Having a calm service dog sitting close to a victim of a crime in a courtroom when participating in a stressful trial or when they need to be in the same room as their attacker in a court proceeding can help an individual manage the inevitable stress of their difficult circumstances. Anecdotes from numerous legal teams and their clients have demonstrated that a service dog’s presence in difficult cases can assist in boosting courtroom morale, increasing a victim’s sense of security, as well as influence an individual’s courage or willingness to testify in highly stressful courtroom situations. Outcomes have shown time and time again in difficult court cases across the country, especially involving circumstances such as violence and various forms of abuse, that having a service dog present to support a victim/or victims has proven invaluable to those who are suffering. The rapid national expansion, as well as international expansion of the use of service dogs in the judicial system, demonstrates the great value communities are finding in the unique qualities found in service dogs.

While New Life K9s primarily focuses on service dogs for veterans and first responders, we have placed service dogs with facilities such as fire stations and universities. If you or your organization are interested in applying for a facility dog please email us at newlife@newlifek9s.org.